We give back to sport through Northern Camp 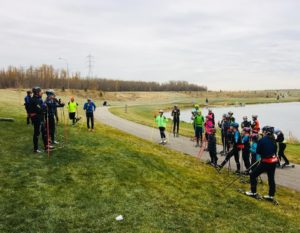 Alpine Insurance AWCA, CRTG give back to sport through Northern Camp

When it comes to cross-country ski champions, Northern Alberta has a rich history. Beckie Scott changed the sport from Athabasca. Olympians such as Graeme Killick, Amanda Ammar, Jamie and Amanda Fortier all began their careers north of Edmonton. For decades, the north has been a strength.

However due to geography and funding, many northern skiers don’t participate in high performance training camps, or ski alongside Olympians every day like their Canmore brethren. Often, clubs go as far as mom and dad want them to go. Thankfully, several Alpine Insurance Alberta World Cup Academy and Capital Region Training Group athletes are giving back to ensure the skier pipeline keeps flowing.

The Alpine Insurance AWCA and CRTC athletes invited 25 teenaged skiers from Northern Alberta to partake in a two-day camp in Edmonton, designed to pass on expertise to club athletes aged 11 to 19. Young skiers from Grande Prairie, Fort McMurray, Drayton Valley, Edson, Edmonton and beyond all took part in the camp, which included roller ski and agility training, strength workouts, time trials and more, all under the watchful eye of top Alpine Insurance AWCA athletes.

The senior athletes designed and taught the two-day camp, which focused on technique and strength, while keeping the sport fun.

“The coolest thing is we gave the athletes free reign on how they want to set the camp up. I was impressed with how well the CRTG and AWCA athletes have done in organizing the camp. They kept the kids moving, non stop,” said AWCA head coach Chris Jeffries.

Jeffries, Scott Perras and CRTG coach Ian Murray spent time pouring over the fundamentals of coaching before unleashing the Alpine Insurance AWCA/CRTG  upon the northern skiers. The teenagers flourished, as they were challenged to push their limits by the likes of Annika Hicks, Dominique Moncion-Groulx, Antoine Hebert, Etienne Hebert and Michael McIsaac-Jones. For some young athletes, it was their first time on roller skis.

“I’m impressed with how technically sound the kids from the Northern parts of the province are. We don’t see these kids too often, and they don’t see our level of athletes. They are often in small locations, with parent-driven clubs. We want to make sure they are supported,” Jeffries said.

The benefits proved to be twofold. The young skiers learned a great deal from the Alpine Insurance AWCA and CRTG athletes, who in turn received valuable coaching experience, as well as a jolt of enthusiasm and inspiration from the teens.

“It’s important to pass on what they learned to these skiers. They are peers, and the kids look up to them. This creates a relationship, and it’s important to have these connections to different generations. These weekends also make our athletes better. When they have to verbalize their lessons, they have to think about technique. It makes you do it a lot better when you have to teach it,” Jeffries said.

The trip was Alpine Insurance AWCA athlete Dominique Moncion-Groulx’s first trip to Edmonton. When he saw everyone with a big smile on their face, he knew it was a great program.

“I do think it helps you as an athlete. It’s fun to share things with younger athletes. I was in that boat. I know how it feels to be impressed by really fast people,” Moncion-Groulx said. “Every time I coach, I enjoy myself. I could see myself when I am done skiing and studying being a volunteer coach. There is a good feeling to it.”

World Cup and Alpine Insurance AWCA skier Annika Hicks said taking ownership of the lesson plan, and pushing it in an innovative and fun direction was a rewarding experience.

“It’s like school. If you create a question and answer that question, you will learn the lesson better,” Hicks said. “I definitely really enjoyed it. I wanted to work on being as good as a leader as possible, inspire the kids, and give them something to work on. There are little exercises that can help them, and that’s something that will last.”

Jeffries said the camp is in conjunction with Cross Country Alberta’s mandate to provide more opportunities for Northern skiers. Many of these athletes also participated in a super camp in Jasper in September. The Alpine Insurance

AWCA and CRTC will also host a camp in Lake Louise this November.

“We had 10 athletes in the first year, 25 this year and hopefully we will have 40 next year,” Jeffries said. “This camp is the most unique, as it is very regionally driven. Many come from clubs without the resources we take for granted. The strength of Alberta comes when the entire province is engaged. You name the top Alberta skiers of the past 20, and so many of them are from Northern Alberta.”