Blair Dunbar was recognized for his many contributions by receiving the Officiating Award at the 2017 Alberta Sport Connection Leadership Award Conference on April 29th. 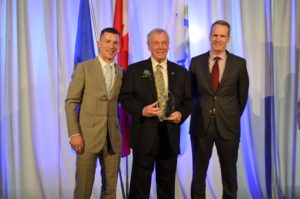 Blair’s 46 years of involvement in cross-country skiing began while living in Inuvik and continued as he moved to Fort Smith, Yellowknife, and Canmore. Blair has been involved in organizing and officiating in club races, Western Canadian Championships, Arctic Winter Games, World Cup races, provincial, and national championships. He has achieved Level 4 FIS Certification and in 2013 became the Chief of Competition for the Paranordic World Cup.

Overall, a much deserved award for his immense contribution to the sport.  Thank you Blair!