The FIS-sanctioned race was the first of its kind in Western Canada, and attracted a boisterous crowd for the beautiful evening of racing. 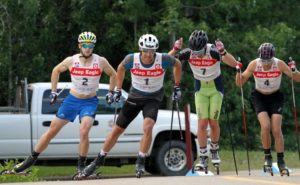 In the men’s final, world champion Alex Harvey fended off attacks from Alberta World Cup Academy athlete Dominique Moncion-Groulx and Canmore’s Reed Godfrey to take the win. Harvey, a master tactician, made his move on the final downhill, and pulled away from the field on the climb into the finish line.

“I wanted a different strategy than in the heats and the quarters. I knew there was a tail wind in the downhill, so there was not much of an advantage to follow. I knew if I could open up a little gap, it would be good enough to stick,” Harvey said.

The short course, which took a mere 1:27 for Harvey to finish, kept his competitors close, which he admitted was tough. He had to conserve energy through the heats, especially after completing an intensity workout earlier in the day.

“I felt the pressure. A race is a race, so it’s game on for me,” Harvey said.

Harvey will travel to Norway soon, where he will train with their national team, and compete in the Blink Roller Ski festival.

“I’m excited for the season. I’ve got a world title to defend and we’ll be back in Canada for world cup finals in Quebec,” Harvey said.

Moncion-Groulx did his best to challenge Harvey, but couldn’t find enough daylight to take first place before the downhill. He pressed hard on the final climb, but fell short.

“I think we kept a similar distance the whole hill. I just couldn’t close the gap. But I think our speed wasn’t that different. (Alex) was in a great position, attacking that last corner. I made a move from third to second, going on the inside. I lost speed there, and Alex attacked right outside that corner. I would have needed an extra push to be right behind him and get more of his draft, and maybe try and slingshot him,” Moncion-Groulx said.

Racing someone of Harvey’s calibre proved to be excellent motivation for the young skiers.

“It’s extra motivation,” Moncion-Groulx said. “A good amount of guys got to race against him and see how he’s skiing. It’s just nice to keep the knife between the teeth, and just try to stick to his butt. We gave him a good challenge on the short course. On distance, it’s a different story. But the young guys are slowly closing the gap.”

AWCA athlete Etienne Hebert won the B final, after he was boxed out in the semis. Hebert showed excellent form all day. Brother Antoine Hebert took fourth in the B final.

Dahria Beatty triumphed over biathlete Sarah Beaudry to take the women’s title, while Cendrine Browne took third ahead of AWCA athlete Laurence Dumais. Beatty followed Cendrine Browne out of the start gates, but also made her move on the final descent, after Browne left the inside corner open. Beaudry pressed on the final climb, however Beatty’s lead proved insurmountable.

“Cendrine had a really great start. I got behind her and I made a tactical error. I should have got in beside her, but Sarah got in beside her. I got boxed behind and pinched off in the first corner. Through the S-turns I was not in a great position, and I had to ski really hard into the downhill. I came out of the downhill beside Sara, and just really put the blinders on and focused on that last climb.” 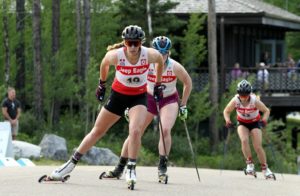 The race was part of a massive training camp, which brought together 60 top athletes from across the country. Beatty said a roller ski race is perfect for the camp.

“I always love putting a bib on in the summer. I find a huge difference between time trials and actually putting a bib on. It gives it a whole different feeling. I’m so happy so many volunteers made this happen. It’s a great addition to the camp,” Beatty said.

She also relishes racing Beaudry every chance she gets.

“Sarah and I have been having this battle for 10 years now. I am always excited when Sarah is on the start line. She’s always an awesome contender. I think it really gives an extra dimension to the cross-country field,” Beatty said.

Emily Nishikawa won the B final after breaking two poles over the course of the heats.

This is the first time AIAWCA has hosted a roller ski race, and the event attracted a field of 27 athletes. Judging by athlete feedback, it has the potential to become an annual event.