Deep in the land of ABBA, two athletes completed their last tune up before embarking on the final leg of their Olympic journey.

At a glance, head coach Chris Jeffries believes his skiers are on track for a successful ‘winner takes it all’ season, and can avoid a personal ‘Waterloo’ in Pyeongchang, South Korea in February 2018.

Beatty was 23rd in the classic sprint race, while Emily Nishikawa (AIAWCA alumnus) was 26th in the 5 km skate race in Gaellivare, Sweden, against a field of top Russian and Swedish skiers.

“For this time of year, I’m quite happy with the overall signs,” Jeffries said. “In November, you’re looking for signs they are on the right track, especially against skiers who are trying to qualify to make world cup teams.” 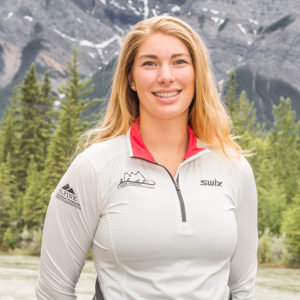 Beatty was the lone Canadian in the women’s sprint heats on Nov 19. She qualified in 28th spot, and was fifth in her heat against stiff competition to finish 23rd. Stina Nilsson of Sweden won the race.

Jeffries saw a lot of positives from Beatty, and said some of the video work they did this summer with Zone 4 has paid off.

“Her starts are a big focus for us this year. She nailed the first pole plant, but didn’t commit to the rest of it. The foundation is there. Now she has to commit to the process,” Jeffries said.

Beatty had a shot at moving on to the next round of heats, but lost contact with the group at a critical corner, costing her the race – something she wants to improve before the world cup races begin Saturday in Finland.

“We give up a little space on the corners. That turns into a gap. Dahria gave up space on a critical corner and that was a decisive moment,” Jeffries said.

Nishikawa had a strong race on Nov. 17, finishing 54 seconds off the pace set by Charlotte Kalla over the 5 km skate. Nishikawa finished the race in 13:53, even though it was only her fourth day in Europe.

Jeffries said Nishikawa’s strength is much improved this year, and she must learn how to use it.

“Both girls were too stiff and too tall in the legs. We spent time getting stronger, and the goal is to stay deeper in the legs, while maintaining good control,” Jeffries said. “It’s similar to watching both of them striding – it’s important to remind them to get deeper, lengthen their stride and trust that the kick is there.”

The world cup season begins Friday (Nov. 24) in Ruka, Finland with the classic sprints. Jeffries believes Nishikawa and Beatty are on track for strong results in three weeks time, in Davos, Switzerland.

“I’d rather see them execute technically, and see the results suffer a touch in the short term. That is where the gains will be seen,” Jeffries said.