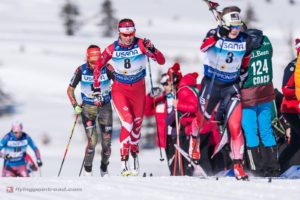 AWCA star Dahria led the Canadian contingent at the World Junior/U23 championships in Soldier Hollow, Utah, locking in three top-20 performances over the week long event to solidify her role as the nation’s top prospect.

Beatty, 22, finished 12th in the sprint, 16th in the 10 km skate and 19th in the skiathlon to lead the team.
“The top girls at U23 world championships are capable of top top-20 performances on the World Cup,” said AWCA coach Chris Jeffries.
Competing at elevation on an extremely hilly course which didn’t play to her strengths, Beatty battled all week with the top young athletes on the circuit. She qualified eighth in her sprint, and was in striking distance of the top-three. A tactical error may have cost her a better result on the day, but Beatty was skiing well, bringing her never say die approach to the heats. A 12th place finish was satisfactory on the day, as Anna Dyvik of Sweden won the race, followed by The Krokan Murud o Norway. Maja Dahlqvist of Sweden finished third.
In the 10 km skate, she was right up there with the leaders until the eight kilometre mark, but ‘blew up’ on her last trip up the big climb.
“The courses here are really tough. I tried to go out fairly conservatively today. I started smooth and was able to build into the second lap where I was in a good position in the top 10,” Beatty said. “I definitely haven’t figured out how to save my legs on the five-kilometre course here at Solider Hollow, but in the end I was happy with my effort.”
“In the 10 km, she was right there after the first lap. She had only given up 15 seconds to the winner. But on that course, she gave back a ton of time on the second half. That’s not like Dahria. She’s a really good finish and the results are uncharacteristic of her skiing… We learned that course and that altitude doesn’t suit Dahria’s skill set, but she’s still walking away with a positive experience,” Jeffries said.
She’ll now reset and focus on world championships, where she will join fellow AWCA teammate Olivia Bouffard-Nesbitt in Lahti, Finland. Maya MacIsaac-Jones also raced the sprint at U23s and finished 31st. It wasn’t the result she was looking for, but she redeemed herself the following week at Eastern Canadian championships with a three medal performance.
Jeffries said the races were solid for Beatty, but not spectacular. The results prove a specatacular race wil have her competing for a podium.
“After every race, we would debrief. She was never destroyed about a performance. She saw the positives and things to work on for the future. One of the things that impressed me was her attitude after races, especially if it didn’t meet her expectations, her mindset was always positive. It allows her to come back and ski well.”
AWCA Results
U23 Women’s Sprint:
1. Anna Dyvik (SWE)
2. Thea Krokan Murud (NOR)
3. Maja Dahlqvist (SWE)
12: Darhia Beatty (CAN)
32: Maya MacIsaac-Jones (CAN)
U23 10 km interval skate:
1. Anna Dyvik (SWE)
2. Tiril Udnes Weng (NOR)
3. Lovise Heimdal (NOR)
16: Dahria Beatty (CAN)
U23 20 km skiathlon
1.     Lotta Udnes Weng (NOR)
2.     Johanna Matintalo (FIN)
3.     Yana Kirpichenko (RUS)
19.  Dahria Beatty (CAN)