Taking the East by storm 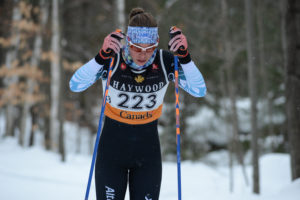 Maya MacIsaac-Jones won three medals, while Dominique Moncion-Groulx took a gold in the sprint and bronze in the classic race to earn consideration for World Cup starts in Quebec City.

MacIsaac-Jones battled with American Anne Hart all weekend, and came away with a gold medal in the sprint, silver in the 15 km pursuit and bronze in the 10 km skate race.
“Maya was really happy. She skied at a high level. Anne Hart is one of the top girls on the US SuperTour, and Maya matched her all weekend,” Jeffries said. 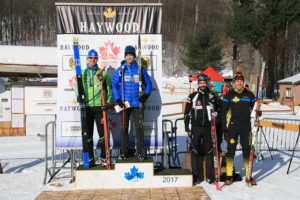 Moncion-Groulx had an emotional weekend racing in front of his family, and continued the fine form he showed at Canadian Western Championships earlier this season. He took gold in the sprint and bronze in the 20 km skate, behind Russell Kennedy and Andy Shields.

“This was another strong weekend for Dom. It was a special day for him. His family was there, and a lot of his friends. He went back and forth all spring, trying to decide if he’d quit or keep skiing. He came back and has seen the gains from the jump in training. 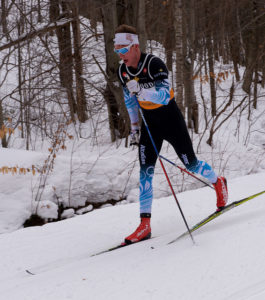 He now has a shot at a start on the World Cup,” Jeffries said. “Now it’s clicked. He has different gears. He can race aggressively… he’s a well liked person in the ski world. When he has a good race, everyone is happy. I haven’t seen that before,” Jeffries said.

Jack Carlyle also had a strong race, and had the second fastest time of the day in the pursuit. Jeffries also praised Antoine Hebert, who redeemed himself after a tough day in the sprint.

“Antoine, I was ready to kill him after the sprint. He did my least favourite move, where he stood up and coasted too far away from the finish and got caught. He’ll never do that again,” Jeffries said. “After that, he had the best race of his season, when he finished ninth in the 15 km classic.” 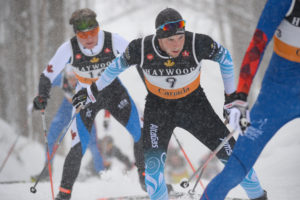 Jeffries said Hebert is another athlete who is now reaping the rewards of his hard work.
“When he came in, he was a kid we didn’t know too much about. He’s trained hard and for him to see it pay off over two weekends is exciting.”
Jeffries said the team is generally improving, but he wants to see more from some of the younger athletes.
“We’re still missing the mark with a couple of guys. There is a long list of guys who come in for year one, and the volume is too much, but it’s a necessary evil, and they are stronger the next year,” Jeffries said.
Hebert, MacIsaac-Jones, Carlyle, Moncion-Groulx and Hicks will now travel to Europe for a ski tour through Germany and Switzerland, where they hunt for top level races.
Eastern Results:
http://zone4.ca/event/090a5bf2-e8dc-11e6-9e5c-0a7aff3e7c9d/