The Alpine Insurance Alberta World Cup Academy is proud to announce our new team for the 2018-19 season.  Headed by veteran Canadian National Team members and 2018 Olympians, Dahria Beatty and Emily Nishikawa, this year’s team truly encaptures diversity and inclusion.  As we celebrate our 10th anniversary, we look forward to continuing our reputation of building Canadian champions and Olympians.  We are also excited to begin a new chapter, as we begin programming in Calgary for University students this August. 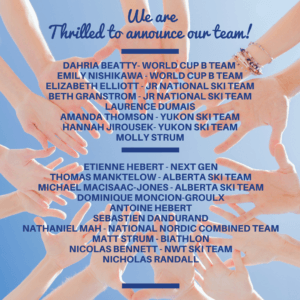 The Canmore team is back with another strong group of athletes as we begin a new quadrennial and set our sights on the 2022 Olympics in Beijing.  Complimenting our veterans is a young group of hungry racers, led by Next Gen athlete Etienne Hebert.  We have a new face leading this program, as Allison McArdle takes over head coaching duties for this group.  Adds Allison, “I’m really enjoying working with this dynamic group of athletes.  We’re working well as a team to push the boundaries, refine technique and develop as individuals while learning from each other.  I love that there is a hearty dose of fun while trying to find the edge over the competition.”

The big news for this spring is our University group in Calgary.  Starting at the end of August, 9 athletes will form the nucleus of this new development pathway.  This idea has been in development for a couple of years, and the start of a new Olympic quadrennial made for the ideal time to get it off the ground.  The goal was to develop an athlete centred model that is designed to allow athletes to study full-time while still pursuing their sport goals and aspirations.  As explained by Calgary head coach and AIAWCA program director Chris Jeffries, “really what we tried to design was a program that was built with the athlete in mind, as opposed to the “program”.  We looked to the NCAA system as much as anything when we put the design together.  What really stood out to us was the idea that an athlete can graduate in 4-5 years and be competitive both domestically and internationally.  We also really liked the idea that an athlete can go home for the spring and summer where they have the most support, and then roll back in with us in the fall.  We think this is a winning solution for everyone.”