The French gave everything to take the IPC Worlds relay win. © James Netz

“It’s a really collective victory,” Clarion said through a translator. “We are only three athletes in Team France and we decide to compete all together and so it seems to have been the best choice.”

By the end of the third split, France had built a lead of over one minute. Russia pressed in the final leg, but could not catch up.

Daviet, who skied the first and third legs for France, said: “I (started) very strong. I tried to stay with the first skiers and I finished with all I have – my best.”

Russia (27:30.7), composed of sit-skiers Grigory Murygin and Roman Petushkov and standing skiers Vladislav Lekomtcev and Rushan Minnegulov, were third after the first leg, but improved to take silver.

The Ukrainian team of Iurii Utkin and guide Vitalii Kazakov, Ihor Reptyukh (standing), Maksym Yarovyi (sitting) and Iaroslav Reshetynskiy with guide Artur Gergardt, led for the first two legs before giving way to France and settling for bronze in 27:40.3. 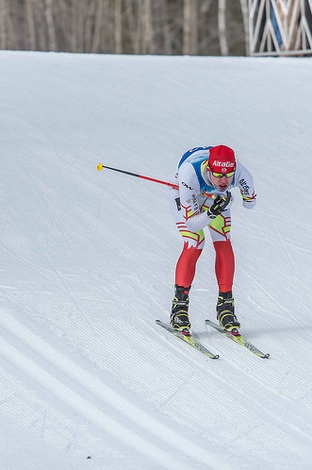 Led by Paralympic champion, Chris Klebl (Canmore, Alta.), the Canucks were in the medal mix for the opening 2.5-kilometre leg. Klebl handed off to two-time Paralympic medallist in biathlon, Mark Arendz (Hartsville, P.E.I.) who set the stage for the Canadian rookies in the final two laps. At just 21 years of age, Brittany Hudak of Prince Albert, Sask., continued to demonstrate her potential while holding court with many of the world’s best before handing off to rookie, Emily Weekes. Competing in her first major international event, Weekes of North Vancouver, brought the Canadians home – just short of the podium in fourth at 31:55.2

“All things considered, it was an amazing day for us. We skied 3.5 out of the 4 legs to near perfection,” said Robin McKeever, coach, Canadian Para-Nordic Team. “While we didn’t get on the podium, this was a big day for our team that provided additional experience and learning on what is required to compete at this level.”