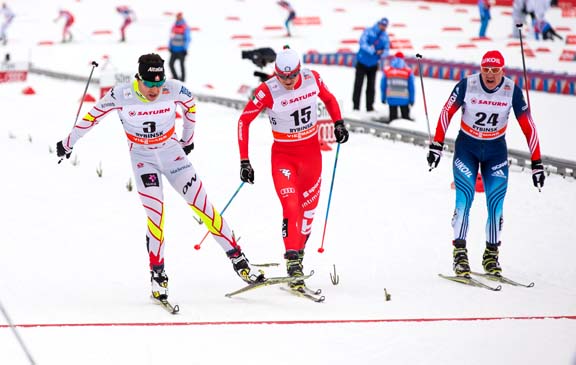 skitrax.com release by CCC January 26, 2015 (Rybinsk, Russia) – Alex Harvey (CAN) bounced back after a difficult sprint race to climb his way back into the top-10 in a men’s 30-kilometre pursuit race on Sunday in Rybinsk, Russia. Harvey, 26, took advantage of ideal racing conditions to post a ninth-place time of one hour, 22 minutes, 10.8 seconds (1:22:10.8).

“Having raced three times this weekend, I was feeling a little fatigued and was missing a bit at the end of the race,” said Harvey. “All the same, I’m satisfied with the result. Being in the top-10 – you always have to take that with a smile.”

Harvey, of St-Ferreol-les-Neiges, Que., skied near the front of the lead pack for the majority of the 15-kilometre classic leg. After entering the transition zone to switch into skate-skiing gear with the clock still running, the two-time Olympian charged out onto the course for 15 kilometres of skate skiing. Executing his race tactics to near perfection, Harvey took his turn at the front of the pack, while leading the field through the rolling terrain.

Ensuring none of the world’s best could surge ahead of the pack, Harvey was in complete control with the final five kilometre loop. Matching stride-for-stride with the lead group, Harvey was not able to respond to the pace that intensified with two kilometres to go, and fought for ninth spot.

Russia’s Maxim Vylegzhanin (RUS) was first to cross the line and led six Russians into the top-eight. Vylegzhanin clocked a time of 1:21:54.8. Switzerland’s Dario Cologna (SUI) was second at 1:21:57.5, while Finland’s Matti Heikkinen (FIN) skied to the bronze-medal step of the podium with a time of 1:22:01.0. 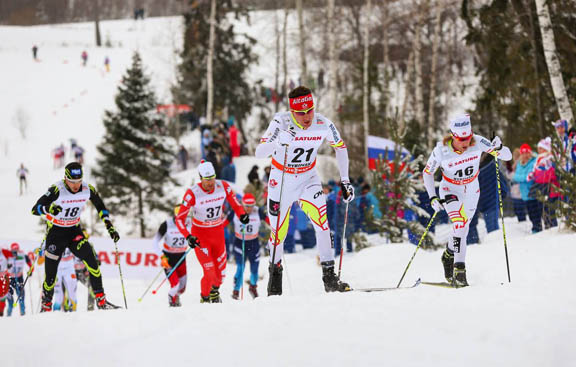 Ivan Babikov, of Canmore, Alta., capped off one of his strongest World Cup weeks of the post-Olympic year. Returning to his birth country, Babikov hammered the pace in the skate-ski leg, picking off the field one-by-one until he finished in 19th spot at 1:22:26.3.