Dupont, Widmer duke it out in Western sprint 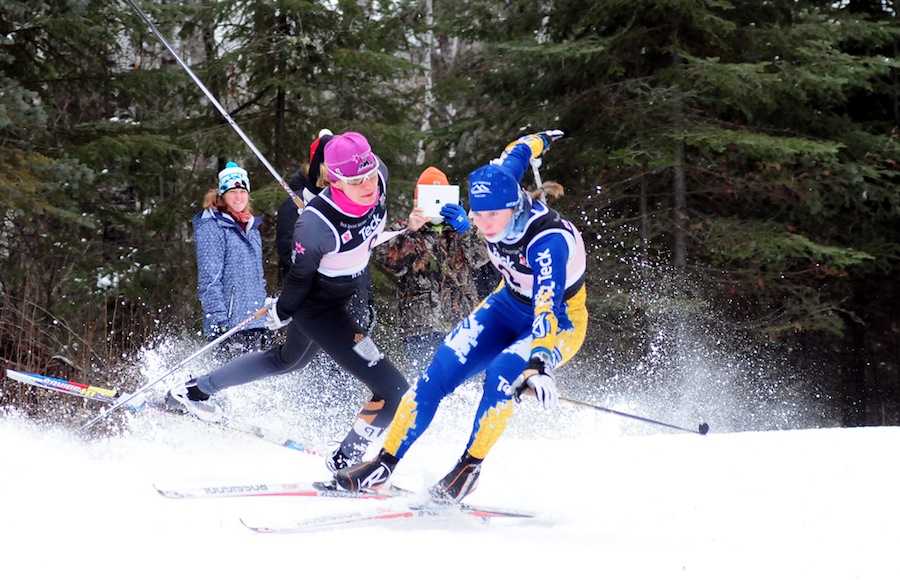 Heidi Widmer (l) and Andrea Dupont after colliding at a NorAm sprint last January in Thunder Bay, Ontario. Widmer suffered a mild concussion, but qualified for the U23 World Championships as a discretionary pick and was fully recovered in five days. Photo: John Sims. faster skier.com

By Justin Brisbane, January 22, 2015
The last time Andrea Dupont and Heidi Widmer battled head to head in a skate sprint at the Canmore Nordic Centre, it was for a trip to Sochi.

On a tense, snowy day, Widmer dominated the field to clinch a trip to her first Olympics, while Dupont was left pondering her future after finishing fourth in the A final.

“A year ago, Heidi took it on the climb. Since then, you rehearse the race in your mind and I know I have to hang onto the finishing stretch. I know I’m strong at the finish and today I was able to hang on,” Dupont said.

The 34-year-old Dupont had to be tactical to take the win in the A final, as the course included a large climb and several technical sections. She and Widmer opened up a small gap on the field after the climb, and crested the top of the final downhill neck-and-neck. In all speed sports, such moments usually define the race. On the Nordic Centre sprint course, the racer leading on the last downhill is usually at a disadvantage, as the second racer is usually able to tuck in behind, riding the slipstream to conserve energy and use a slingshot maneuver to take the lead on the final stretch. This time, Dupont ended up with the advantage.

“At the downhill, Heidi went wide to force me to go first. We went in together and I tucked in,” Dupont said.

The two barreled into the stadium, where Dupont found an extra gear to secure the win. It was her first skate sprint victory of the season and a huge relief for Dupont, who wants a spot on Canada’s world championship team.

“I’ve had some good races in qualifying, but I haven’t really pieced it together in the final yet, so it feels good to finally do it,” Dupont said.