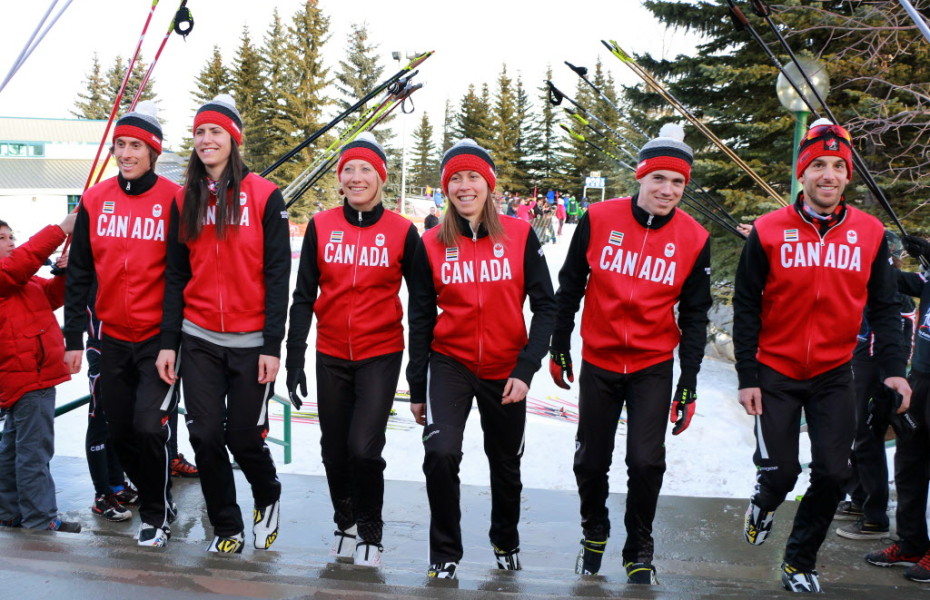 Six of the eight member biathlon team were on hand for the event from left are; Brendan Green, Rosanna Crawford, Zina Kocher, Megan Imrie, Nathan Smith and Scott Perras. The other two team members not at the event are Megan Heinicke and Jean-Philippe Le Guellec. Photo Gavin Young Calgary Herald

Brendan Green shot clean, Megan Heinicke cracked the top 12 for the first time in her career and Scott Gow posted a personal best result in what was an excellent weekend for Canada on the world cup in Ruhpolding, Germany.

Green returned to form with a 16th-place finish in the men’s sprint on Saturday (Jan. 17) and followed it up with an 18th in the mass start on Sunday (Jan 18).

Injury and illness slowed him down early in the year, but when healthy, he’s a threat for top 20 results. He shot 40/40 over the entire weekend and was less than a minute off the pace for the win in the mass start. Simon Schempp of Germany took the win in a photo finish over Quentin Fillon Maillet of France and Michal Slesingr of the Czech Republic.

“It’s hard to say exactly why my shooting has been solid over the last three races. It’s a bit of luck, for sure, but I think I’m finally able to commit to a few small changes that I was working on over Christmas and fully trust my current position and mental approach,” Green said.

Biathlon world cups have been plagued with poor weather all year, and Ruhpolding was no different. Green said that affected his skiing, but everyone had to contend with the same course.

“It was really hard for me to judge how my skiing was going. The conditions were very frustrating to ski in, with deep slushy snow, but I did what I could to ski smooth and not let the conditions get the better of me,” Green said. “I opened up my race much slower than I would have hoped, but my speed and how I felt progressed steadily as the race went on.”

Gow joined Green in the top 30 in the sprint with the best race of his career finishing 27th. Gow shot clean and was 1:53 off the pace. The Canmorite finished less than three seconds behind Olympic champion Martin Fourcade of France in his return to the world cup, after spending December racing IBU Cup races.