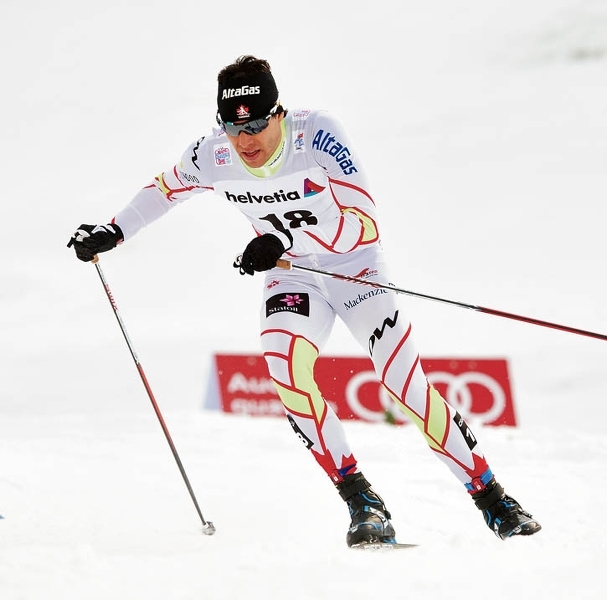 Already dubbed the Prince of Quebec, Alex Harvey is well on his way to obtaining another crown: The king of cross-country skiing.

Harvey took silver in the second stage of the grueling Tour de Ski in Oberstdorf, Germany, coming from 20 seconds back in a 15 kilometre pursuit race to win the 14th world cup medal of his career.

Peter Northug of Norway won the race in 42:01.2, edging Harvey by half a second.

After Saturday’s prologue where Harvey finished 13th, Harvey, 26, had more than 20 seconds to make up on the leader, Dario Cologna of Switzerland. Harvey worked with Martin Sundby of Norway to close the gap after the first two laps. On the hilly course, the two skiers set out an incredible pace on the first two laps.

“I knew Sundby would want to close the gap early. We started really hard as I expected,” Harvey said. “I was pretty tired early, so I just tried to ski more controlled in the third and fourth lap. The conditions were icy and even dirty in places, so on the last lap I stayed out of trouble, especially up the final hill, to set myself up for a good sprint for the finish.”

Ivan Babikov also had one of his best races of the season. He climbed 27 spaces to finish 30th, clocking a time of 43:17.8. It was one of the best classic races of his career.

Devon Kershaw also took a giant leap up the standings, moving from 45th to 36th spot. Len Valjas dropped down to 83rd and was suffering from a stomach illness during the race.

Tour de Ski is a nine-day event modelled after the Tour de France, with seven different races over five days, concluding in Val Di Fiemme, Italy on Jan. 11. It totals more than 100 kilometres of racing over that period.