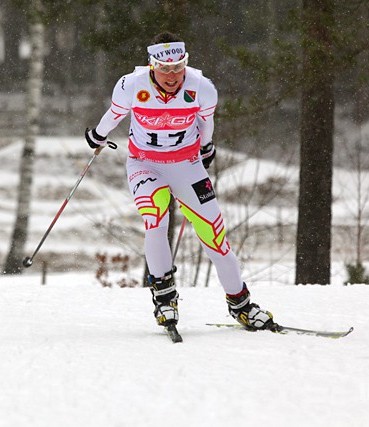 cccski.com January 30, 2015. While the Haywood NorAm Eastern Canadian Championships were taking place at Nakkertok, a Nakkertok skier, Patrick Stewart-Jones, was racing along with Larch Hill`s Alysson Marshall at the Finnish National Championships in Jämi.

Alysson and Patrick took part in the Rybinsk World Cup and are racing in Finland as they wait to participate in the B-Tour that will race in Latvia and Estonia.

Today`s race was a classic sprint and would feature the best skiers in Finland, as it would likely also be used as a selection race for the Finnish team for the upcoming World Nordic Championships in Falun.

In the morning qualifier Alysson finished 15th out of 49,  in a race won by Finnish sprint star Mona-Liisa Malvalehto. Patrick Stewart-Jones was was 25th out of 80 in the qualifier, that was won by Matias Strandvall.

Both Alysson and Patrick finished 4th in their quarter-final heats. Anne Kylloenen, who has several World Cup medals to her name, won the women`s race with Alysson finishing 19th. Patrick finished 20th overall, behind Strandvall.Jämi