cccski.com, February 3, 2014 – It was the final day of racing at the World Junior Championships and the warm wet weather continued. The women’s race was a 4 X 3.3k relay and for the men it was 4 X 5k.

Canada had some high hopes for the women’s relay, with thoughts of matching or beating the “Best Ever” placing of 7th in 1996, in mind. That team was composed of Sara Renner, Jaime and Amanda Fortier and Melissa Hayman. 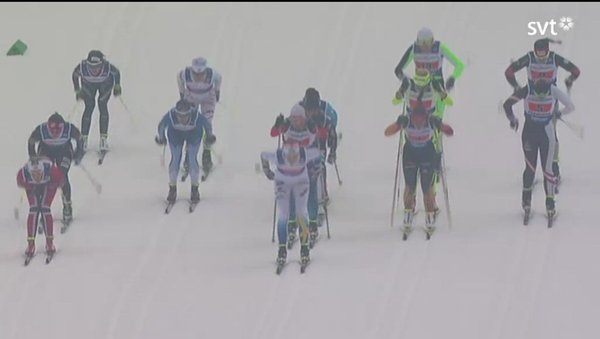 It was a quick pace from the start as Sweden, Russia and a couple of other teams looked to make an early break from the pack. Frédérique Vézina had led off for Canada and like many others was unable to match the early pace, coming through the 1/2 way mark tied with the U.S. in 11th, 30 seconds behind the leaders.

By the exchange we were still in 11th, 24 seconds behind 10th place Italy. At the front Sweden and Russia were battling it out for the lead. 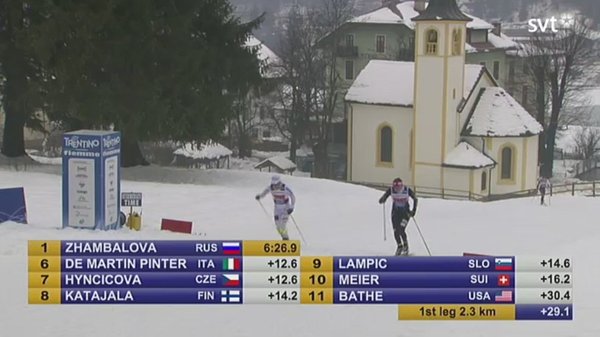 Dahria Beatty was the 2nd leg classic skier and skied very well, 7th fastest on her leg, pulling Canada back up to 9th. At the exchange we were just ahead of Italy and 8 seconds behind Belarus. At the front Russia and Sweden were skiing together in the hunt for gold.

Anne-Marie Comeau was the 3rd leg skier for Canada and while she managed to track down Belarus, she was overtaken by Slovenia and Italy, leaving us in 10th at the exchange. On the 3rd leg Russia had built up a 10 second lead over Sweden as 2 of the stars of the Championships, Natalia Nepryaeva and Jonna Sundling, headed out on the course.

It was a victory for Sweden, who have had a strong performance at the Worlds, as Sundling tracked down the Russians and pulled away for the win. Norway finished 3rd.

Katherine Stewart-Jones skied the anchor leg for Canada and was unable to close the gap to 9th, for a 10th place Canadian finish, 3 better than at the 2013 World Juniors.

The men’s relay was led out by Ricardo Izquierdo-Bernier. He started 3 rows back and moved up into the top few by a bit of a circuitous route at the start. 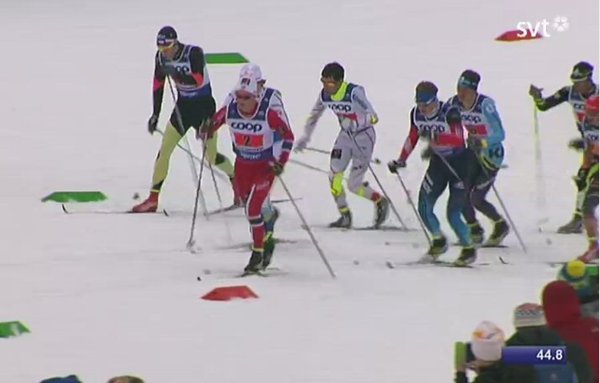 Ricardo takes the lead 3 minutes in

As the leg progressed Ricardo was joined by Sweden who took over the lead, the Russians and a few other nations. On a downhill, just before the stadium Norway and Germany tangled and fell. Fortunately Ricardo made his way by them safely and was 6th at the 2.5k mark, 4 seconds from the lead.

At the 5k mark Ricardo handed off to Alexis Dumas in 10th, 5 seconds from 6th. Russia was in the lead just ahead of France.

At the 1/2 way mark of the race we had slipped to 12th, skiing just ahead of the U.S. with Estonia 10 seconds ahead.

Scott Hill skied the 3rd leg for Canada and had a strong race, catching up to 11th place Estonia quite quickly. Soon it was Estonia, U.S. and Canada skiing together but then Scott increased the pace, losing the other 2 skiers and starting to make inroads on Germany in 10th.

At the final handoff to Ben Wilkinson-Zan Canada was in 11th, with a chase group 20 seconds back of Austria, Slovenia and the U.S. By the 1/2 way point they were skiing together, minus Austria, and then Slovenia moved on leaving Ben in 13th.

At the front Russia and France had been trading the lead, with Norway catching them part way through the last slap and then surging ahead for the win. At the finish Russia lost the silver when their anchor leg skier eased up at the finish in celebration and the French skier nipped past him at the line.

So it was a busy week at the World Juniors with some encouraging results in sometimes difficult conditions.  The highlight would be Ricardo Izquierdo-Bernier’s 14th place finish in the 10k classic Dahria Beatty’s 15th place result in the 5k. Both results are among the best previously obtained by Canadians at the World Juniors. The increased depth of talent on the junior women’s side is also a positive sign for the future of Canadian skiing.
For all the nordic fans that enjoy early morning race watching, stay tuned Saturday at 5am EST, on CBC, to watch the first race from the Olympics, the women’s skiathlon. (or of course you could set your PVR)
Broadcast Schedule
Schedule and Results
CCC Olympic Page
You may not be able to follow your favourite athletes direct on social media, as Alex Harvey, Devon Kershaw and Ivan Babikov have all announced they are on “Twitter blackout” until after the Games.