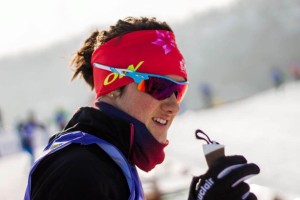 Olivia Bouffard-Nesbitt (Rocky Mountain Racers) at U23 World Championships last week in Almaty, Kazakhstan. There, the 22-year-old Bouffard-Nesbitt posted the best result of her career: 12th in the 15 k skiathlon. Photo: Raphaël Couturier

I can’t remember a time before skiing was in my life. I started out in my dad’s back pack, then progressed to being towed behind him on downhill skis, then finally got to kick my own cross country skis at four years old. The biggest and best part of my life as a skier is defined by all the adventure skis I’ve been on with my parents and my friends. That is how I learned to ski
and where I found my passion for the sport.I started training more seriously when I joined Les Fondeurs Laurentides in St. Jerome, QC. After moving out West and training with a couple different teams, I finally
moved to Canmore in 2012 to race with the Rocky Mountain Racers. 2014-15 was a breakthrough season for me. I had a t
welfth place finish at World U23 Championships in Kazakhstan which earned me starts at the World Senior Championships and a spot on the National Ski Team!
Home town: Morin Heights, QC
Club: Fondeurs Laurentides
Equipment: Madshus
Ultimate ski goal: dancing on a World Cup podium
Best trick: Royal Christie Crossover