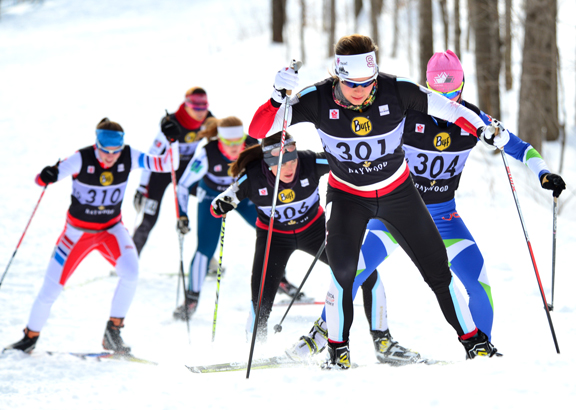 skitrax.com, January 30, 2015 Release by CCC. January 30, 2015 (Nakkertok, ON) – The promised 10-15 cm of snow fell at Nakkertok last evening and cleared up just in time for the Buff skate sprints, part of the Haywood NorAm Eastern Canadian Championships. The tracks were a little soft in places as skiing got underway at a brisk and breezy -13 deg. C.

The sprint course involves two significant climbs separated by 1 major downhill and flatter section. The uphills are wide and usually good for passing, but the softer snow made the going a bit tough.

In the men’s qualifying race Sebastien Boehmler-Dandurand of Canmore had the top time, followed closely by a pair of local racers from Skinouk and a trio of Lappe Nordic competitors. The top junior was Angus Foster from Big Thunder Nordic.

The women’s event saw Foothills Nordics Heidi Widmer win by a full 9 seconds over Buff Sprint Series leader Andrea Dupont of Rocky Mountain Racers. Third was Team Hardwood’s Jennifer Jackson, an impressive result considering this was her first race, since breaking her leg in mid December (running to the start at the Rossland NorAm. Jennifer has 20 days of skiing under her belt. The top junior was Marie Corriveau of Mont Ste. Anne.

The men’s final saw Michael Somppi setting the early pace, with his Lappe team-mate Andy Shields and the rest of the pack right behind. As they came to the final hill Shields was leading the pack.

As they returned to the stadium Somppi and Shields were “neck and neck” with Somppi narrowly claiming the Eastern Canadian Championship title by half a second. Kevin Sandau of Foothills kept the pressure up on Somppi’s lead on the NorAm standings with his 3rd place finish. 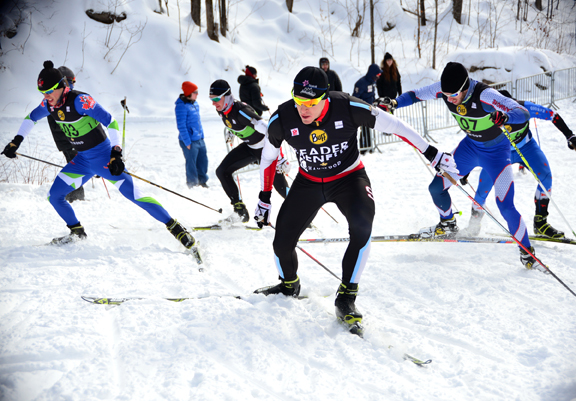 The Junior Men’s title was a close race between the top qualifier Angus Foster and Antoine Briand of Skibec. On the first major climb Foster was leading the way and he and Briand created a gap on the field as they made their way down “Dirk’s Dive” the major downhill.

As they approached the last climb Briand had the lead on Foster, but Foster made a major move to pass halfway up the hill. Unfortunately for Foster, he caught an edge as he was looking to take the lead, going to his knees and almost getting passed by the pack. It was pretty much an easy cruise to the finish for Antoine Briand the Skibec winner.

In the Junior women’s race Marie Corriveau of Mont Ste. Anne continued her winning ways from the qualifier, with a fairly comfortable victory over Ember Large of Rocky Mountain Racers. The battle for third was tighter as Sadie White of Big Thunder put on a major finishing sprint, in the last 50 metres, to edge out Andrée-Anne Théberge of Skibec by a 10th of a second at the finish.

Just prior to the podium awards a minute of silence was held in memory of Larry Sinclair and Jan Lehman (a NST coach in the late 70’s, and long-time Fischer ski rep) to recognize their significant contributions to the sport.