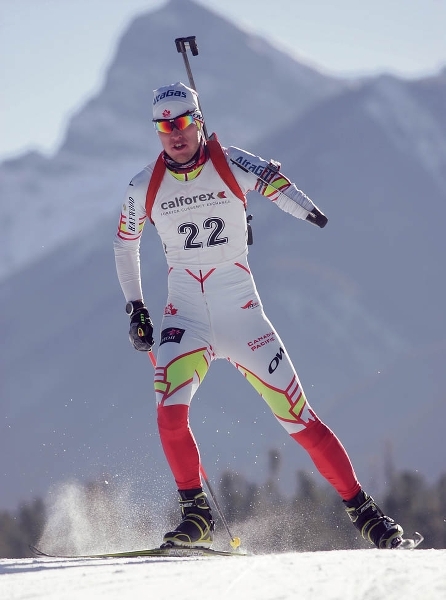 Mark Arendz’s summer weight loss program had one step: get a new arm.

Wanting to trade his bulky prosthetic for a sleek blade that attaches easily to his rifle, the 24-year-old para-biathlete brainstormed with coach Robin McKeever and found an option that was fast and functional.

The prosthetic folds flush against his bicep while skiing, and folds down quickly to provide a stable surface when shooting prone.

“I wanted something lighter this year, and we came up with this,” Arendz said before the season.

Over the years, Arendz has practiced with a number of arms. He lost his in a farming accident in Prince Edward Island when he was five years old, but that hasn’t kept him from becoming one of Canada’s top nordic athletes.

He appears ready to contend again for the overall IPC cross-country and biathlon title after winning a silver medal in Vuokatti, Finland. He’s won the overall title once, and finished second twice. Coming off a two-medal performance at the Paralympic Games, the wins bring his IPC career total to 17.

He struck silver in the 15 kilometre standing individual race, shooting clean and recording a time of 39:12.9.

“It took me the first two laps to get into the race, but from there I felt I kept getting better with each lap,” said Arendz. “An individual race puts an emphasis on shooting. I made sure that nothing went wrong on the range, and I feel the shooting is finally coming around again. It is getting closer to where I want it.”

Arendz will battle most of the year with Norway’s Nils Erik Ulset, who took the win on Saturday, finishing in 38:08. He’s ready to build on such early success, and is quick to compliment his support crew.