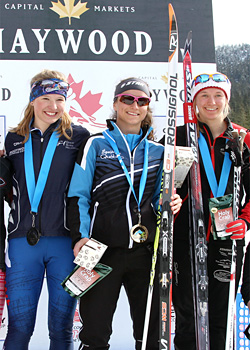 Fort McPherson’s Annah Hanthorn, left, stands on the podium with Sophie Carrier-Laforte of Quebec and Ember Large of Alberta after the junior girls 10-km medal presentation at the Haywood Ski Nationals in Whistler, B.C., on March 26. Hanthorn was the silver medalist in the event. James Cunningham, Cross Country Canada photo

Villages north of the Arctic Circle aren’t traditional stomping grounds for cross-country skiers, but Annah Hanthorn is about to change that.

The 19-year-old from Fort McPherson, Northwest Territories (pop. 742) is in the midst of a breakout season on the NorAm circuit, and won the Canadian Western Championships junior women’s skate sprint, Saturday (Jan. 17) at the Canmore Nordic Centre.

It was Hanthorn’s third win of the year, which is remarkable considering her humble beginnings. One of 10 Hanthorn children growing up 1,000 kilometres north of Whitehorse on the Dempster Highway, the cheerful skier learned the sport with her family on the remote tundra, as it was basically the only affordable activity the entire family could enjoy.

After falling in love with the sport and training in Whitehorse, she began making waves in 2013 at Ski Nationals in Whistler with a silver medal, and at 17, she made headlines when she biked the 1,000-km route from her home to Whitehorse with her 15-year-old sister Ruth, by themselves.

But this year, she’s been a force on the NorAm circuit. She won a pair of gold medals in distance races in Rossland, B.C., shocking herself in the process. Those results also earned her an invitation to join Canada’s world junior championship team next month.

“It’s exciting. I have had huge support from my teammates and coaches,” Hanthorn said.