West Yellowstone Supertour
Preparations began weeks prior to the first races of the year: a pair of skate races, sprint and distance, at an altitude of 2000m no less. As to not shock the body from sucking back Westyellowstone’s thin air, AWCA athletes acclimatized by training in Kananaskis Country. Taking advantage of the Sandau’s cabin on Lower Kananaskis Lake, the athletes enjoyed all the comforts of home (except internet, and cell reception) during their K-Country training camp. The ungodly dump of early season snow that graced the area, along with stellar grooming and large trail network made normally hard training hours at altitude pass as minutes.

The Westyellowstone crew, athletes Knute, Dahria, and Kevin, along with coach Chris, departed mid day after a morning’s workout at the Canmore Nordic Centre. The team stayed the night in Great Falls, Montana, splitting what would be a ten-hour drive into two more enjoyable driving days. Despite slippery roads and low visibility the team made it to West the following day in time to ski a few loops of the racecourses. With one day to go three bags of race skis and two full sets of “test skis” were strung out in the stadium, being sorted through to find the fastest skis and wax.

Temperatures hovered just above -20 C for Friday’s sprint race. Knute set the fastest qualifying time of the day out of the 150 plus men. Despite a confusion of being called to the start line early causing her to start at the wrong time, ski a complete 180 and then go again, Dahria still managed to make the heats. Distance Specialist Kevin also had a respectable start finishing 24th. Dahria and Knute both skied their way into the A final finishing 3rd and 4th respectively.
In the distance race, Kevin and Knute were able to work together, making time on the field throughout the 15km, three lap course to finish 5th and 6th on the day. Feeling her efforts from the day before, Dahria still managed a respectable 23rd in the competitive women’s field.

After a Successful first week of racing the trio returned to Canmore to join the remainder of the team for the first NorAm of the year. 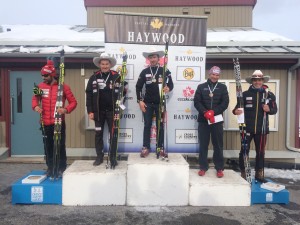 Winners of the Senior Men Classic

With much of the race courses overlapping the Frozen Thunder loop the Academy athletes were more than familiar with Saturday’s 2.5km lap. The home course advantage showed as many athletes produced top ten finishes, most notably Kevin and Knute double poling the entire course to finish one-two.
The skate distance race saw Dahria take the top spot for the women while Kevin, Knute broke away from the field to finish one-two once again. Patrick narrowly missed the podium finishing fourth. 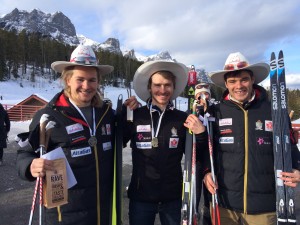 Rain and sleet greeted the athletes at the start line of the sprint race but that didn’t stop AWCA athletes from putting in fast times on what could be the longest sprint course ever.

The suffering of Sandau

In the qualifier Dahria and Olivia finished second and third while Knute won by a huge margin in the Men’s race. By the end of the day the skiers were soaking wet and the wax techs exhausted from the crazy ski/waxing conditions but the AWCA picked up several medals including Delphine’s first podium finish: a close second in the Junior Women. Patrick picked up a silver medal as well and Dahria won another gold.

With only a few days to recover, the team had already made the long drive to Silver Star where they would stay for the weekend’s races at Sovereign Lake.

Silverstar NorAm
Delphine proved that the weekend before was no fluke as she once again landed herself on the podium, finishing third. Knute picked up a second bronze medal for the Academy that day in the men’s sprint.
In the Interval start race Dahria and Kevin both skied to a huge victory by more than 30 seconds! Knute picked up yet another silver medal and Olivia was only half a second from the podium. Another highlight of the day was Alex Stuaktor’s performance, finishing just off the Junior podium and posting a performance best. 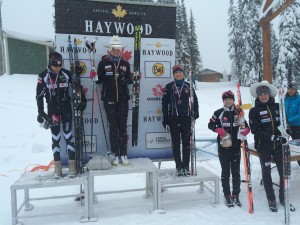 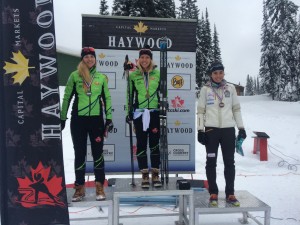 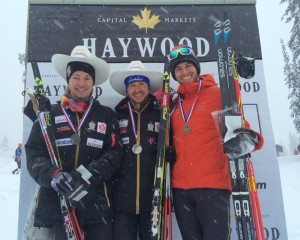 It was a very successful period one on the NorAm for the AWCA. Stay tuned to see how the next month shapes up! US Nationals, B-Tour, World Cups, and Junior/U23 Trials will all have AWCA athletes on the start line.