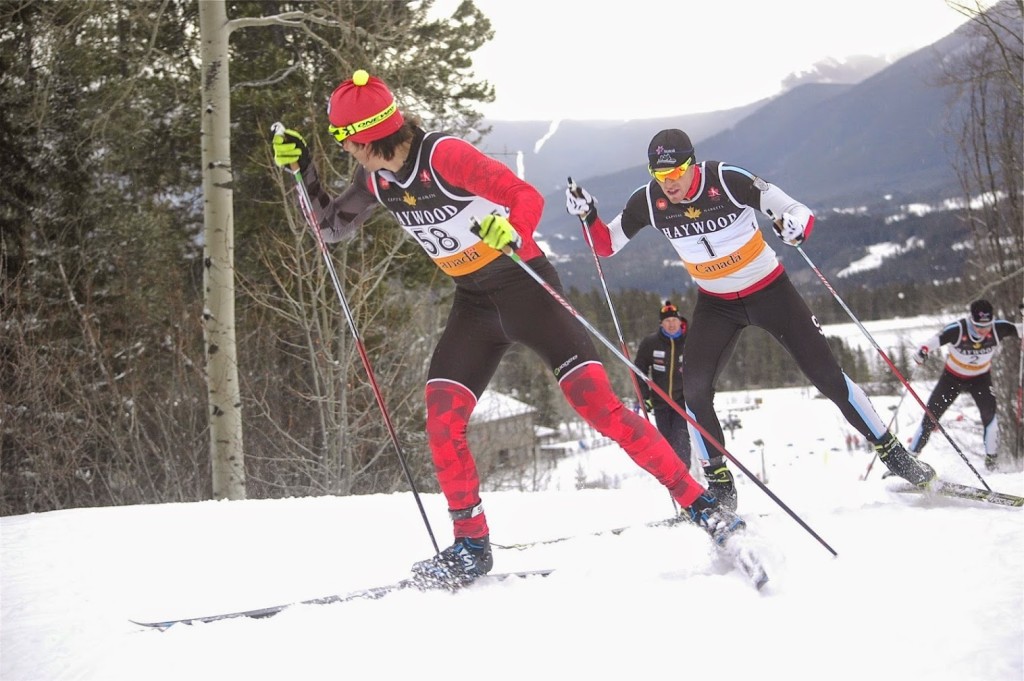 CANMORE, Alberta — This past weekend’s NorAm Western Canadian Championships wrapped up the test run for when the Tour de Canada brings the World Cup to Canmore and Lake Louise, Alberta, next year.

Saturday’s 1.3 k Freestyle Sprint
Above-zero temperatures and sunny skies made for extremely fast conditions for Saturday’s sprint in Canmore. The course was a genuine sprint loop at 1.3-kilometers long and with virtually no flat sections.

Andy Shields (NDC Thunder Bay) posted the fastest qualifier time for the senior men. By the end of the day, Michael Somppi of the Alberta World Cup Academy (AWCA) and national development team pulled away from the field and take his place atop the podium, winning the A-final in 2:43.11.

“I made a split-second decision and attacked before anyone else behind us [Black Jack’s Julien Locke and I caught up,” Somppi said. “Fortunately it was enough to get some separation and I was able to hang on in the finish stretch to win.”

The fight for second place was the excitement sprints are known for with the remaining five skiers within a second of one another. Locke was the skier with the best reach, finishing second, 1.68 seconds after Somppi.

“My strategy in the heats was to stay relaxed and try to make it to the A-final without spending all my energy to get there,” Somppi said.

Knute Johnsgaard (Yukon Elite Squad) took the final podium position finishing third, just five-hundredths of a second after Locke. Ian Murray (Rocky Mountain Racers) was the surprise of the final, finishing fourth, 2.32 seconds after Somppi, after qualifying in 24th, 15 seconds off the pace.

A new rule change regarding false starts in sprint heats changed the woman’s race significantly on Saturday. The rule states that a false start merits a written warning, and any other false start that season results in an automatic disqualification.

The top women’s qualifier, two-time Olympian Perianne Jones (AWCA/NST-Dev. B) fell victim to this rule with a false start in her quarterfinal, which took her out of the competition. The women’s favorite of the day was now out of the running, this greatly changed the race dynamic.

“Things might have been faster off the start [with Jones in the final] but we had a tactical heat.” Andrea Dupont(RMR) said on Sunday. “I led off the start then tucked in behind. I thought about making an early move, but on this course its all about the finishing straight and I was able to attack and get in front.”

Dupont was quick to capitalize on the absence of Jones, cruising to a decisive A-final win in 3:07.03, 2.17 seconds ahead of Heidi Widmer (AWCA/NST-Dev.) and RMR teammate Olivia Bouffard-Nesbitt 3.39 seconds back in third.

“My legs felt tired in qualifying, I just couldn’t push.” Bouffard-Nesbitt said. “I was just pumped to feel a little better in the heats.”

15/20 k Freestyle Mass Start
Sunday morning’s conditions were drastically different from the day before; a dusting of fresh snow and strong wind made the 20 k men’s race and 15 k women’s race a true test of endurance.

Sixty men took to the soft tracks first, and halfway through the race, three men broke away from the pack and would remain in front for the remaining 10 k.

Somppi and Kevin Sandau, both development-team members and AWCA teammates, were familiar leaders in the NorAm distance race. Biathlete Scott Perras (Biathlon Canada) was a new face in the usual mix.