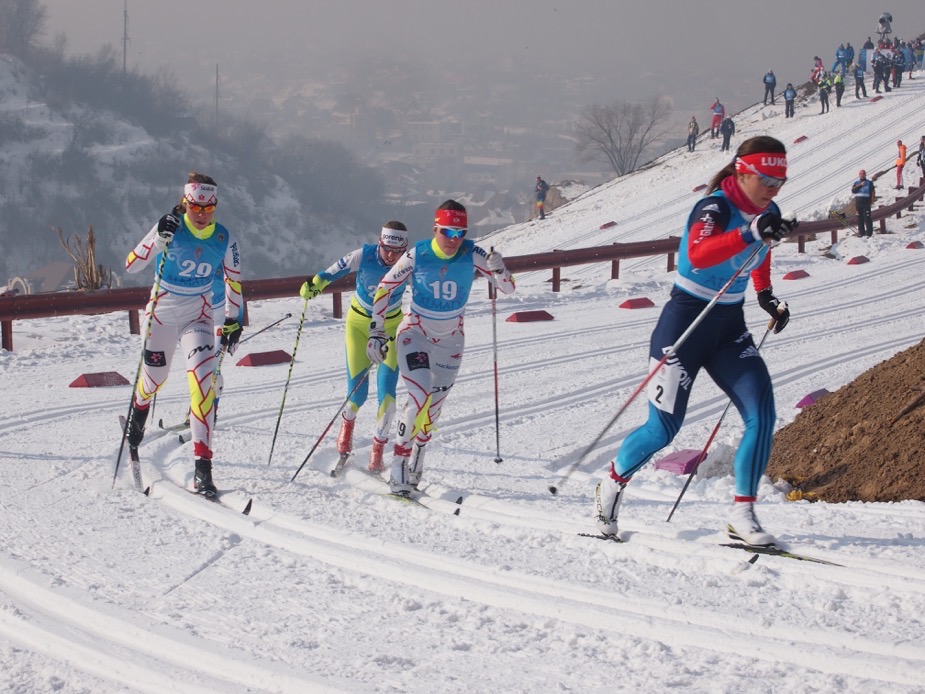 Excerpt from fasterskier.com, by Alex Kochon and Chelsea Little reporting, February 3, 2015 (Almaty, Kazakhstan) – In the women’s 1.3 k classic sprint, Katherine Stewart-Jones knew what was coming, or at least what to expect, in her third time qualifying for the Junior Worlds heats.

The 19-year-old Canadian National Junior Team member qualified in 19th, 13.61 seconds behind Russia’s Yulia Belorukova, the top qualifier in 3:29.24. Stewart-Jones then finished fourth in her quarterfinal, 9.77 seconds after another Russian, Natalia Nepryaeva, who won the heat. Their quarterfinal was the second slowest and Stewart-Jones did not advance, putting her in 19th overall.

“I am satisfied with my result,” Stewart-Jones, the top North American female junior of the day, wrote in an email. “I definitely had the goal to make it past the quarter-finals because last year I was extremely close. I can’t really be disappointed with how it turned out because I gave everything I had.”

I definitely had the goal to make it past the quarter-finals because last year I was extremely close. I can’t really be disappointed with how it turned out because I gave everything I had.” — Katherine Stewart-Jones, 19th in 2015 Junior World Championships 1.3 k classic sprint.

Last year at Junior World Championships, she placed 15th in the freestyle sprint, and the year before, she was 25th at the 2013 Junior Worlds in Liberec, Czech Republic.

But for the first time on Tuesday, she raced against one of her fellow national-junior team members in the heats: Maya MacIsaac-Jones of Rocky Mountain Racers (RMR).

“We both had a really good start so it was fun to ski at the front together for the first part of the race,” Stewart-Jones explained. “After the long downhill I was in third place but then I made a bit of a tactical mistake. At the start of the long uphill I went right behind a Russian but she slowed down. When I went to make the pass and change lanes I lost my momentum.”

MacIsaac-Jones, 19, made the top-30 qualifying cutoff in 29th and ended up fifth in her first time racing the heats at that level, 12.05 seconds behind the winner.

“Katherine and I have raced together for a long time, and since there are so many things at World Juniors that are different from racing in Canada, it was nice to have a familiar face beside me,” MacIsaac-Jones wrote in an email. “My ‘realistic’ goal for today was to qualify, and my ‘dream’ goal was to get a top-15 result. I am very happy to have qualified for the heats, especially to have qualified with two of my teammates, but I am disappointed that I wasn’t able to move on past the quarter final.”

Her previous best in her last Junior Worlds in 2013 was 36th in the classic sprint. On Tuesday, she placed 25th overall. The third Canadian woman to make the rounds, Sophie Carrier-Laforte (Skinouk/NST-Junior) qualified in 23rd and placed 22nd overall after finishing fifth in her quarterfinal, 12.21 seconds behind Austria’s Lisa Unterweger, who won the heat.

“It was a lot of fun to be racing with so many other Canadian girls in the heats today,” MacIsaac-Jones wrote. “We have all been training really hard for these championships, so it feels great to show the world what Canadian girls can do!

“This experience is definitely different from my experience in Liberec 2013,” she explained “I feel like I am in a lot better distance racing shape than I was in Liberec, and I should have a chance to race most or all of the distance races, which will be a lot of fun. This being my second Championships, I feel like I have a bit of a better idea of what to expect and how to prepare for racing on the international scene.”

Stewart-Jones was also looking forward to the distance races after placing 31st in the skiathlon in Val di Fiemme last year. “I would like to make a top 15 in a distance race and I believe that I can,” she wrote.

Read the complete article at fasterskier.com