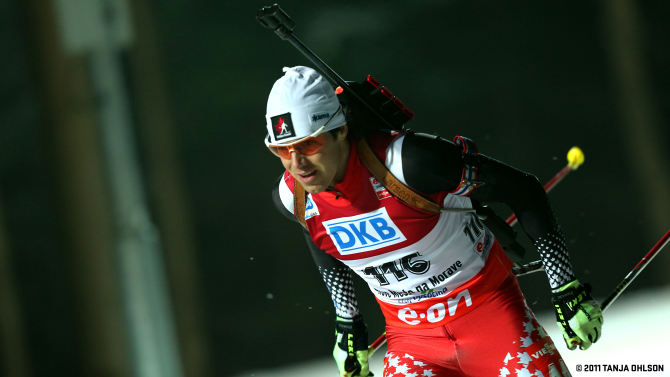 The 29-year-old Smith completed the best weekend of his life, shooting clean for the second straight day to finish fifth in the men’s 12.5-kilometre pursuit competition. The laid-back Calgarian clocked a time of 37 minutes, 49.0 seconds on the steep course in Nove Mesto, Czech Republic on Sunday.

“These are my first back-to-back cleans of my career. I came close last year in Sochi (29/30), but today is extra special because it is the first 20/20 clean of my biathlon career,” said Smith, who was also perfect on the range in Saturday’s sprint. “It feels awesome to have that success. It makes skiing less of a chore, and you’re excited to get back to the range after the next lap.”

Starting time behind the leader in seventh spot based on Saturday’s career-best sprint finish, the 2014 Olympian took many of the greatest names in the sport head on, and did not back down, in the tactical pursuit race that pits man against man rather than primarily against the clock.

“Today was a little unlucky for me as the top-three men were basically the Overall World Cup leaders,” added Smith. “If a couple of them faltered I could have been there, but it is tough to beat the best when they are on 100 per cent. I know though if you’re only a couple of places off the podium enough times, one day it will happen.”

A program that struggles to find financial support, and often flies under the radar, has definitively been raising some eyebrows in the Canadian sport community over the last 24 months.

he impressive finish by Smith makes him the third Canadian biathlete this year alone to post a fifth-place result. Just two weeks ago, Brendan Green sprinted to his career-best fifth place finish. Green’s girlfriend, Rosanna Crawford of Canmore, Alta., got her season off to a blistering start with a fourth and fifth-place result on the World Cup. Megan Heinicke, of Prince George, B.C., has also rattled of a number of personal bests during the post-Olympic year.