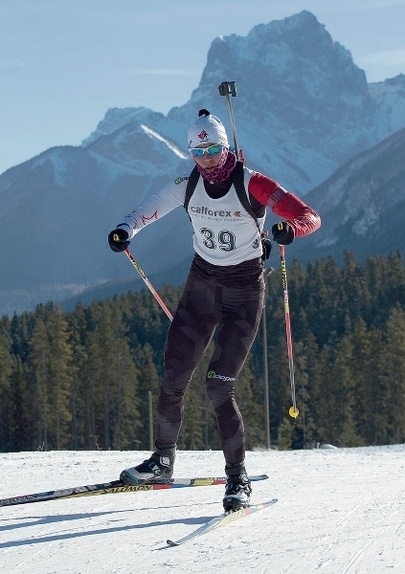 There was purpose and conviction behind her words, backed by the knowledge she’s stronger, faster and shooting with better precision than ever before in her career.

Crawford finished fifth in the women’s pursuit in Hochfilzen, Austria on Saturday, which is the best result for a Canadian woman on the world cup since 2006. She stopped the clock at 31:38.2 for a personal best on the world cup, and now has the knowledge she’s capable of even more.

“Today was great. I felt much better than the sprint on Friday,” Crawford said. “I knew after last weekend a podium is definitely a possibility.”

Starting 34th, Crawford had the fastest time of the day in the top five to rocket up the standings, passing 29 skiers on her way to the finish line. She shot 19/20 and credits fast shooting and great skis for the result.”

“I had a lot of work to do to get up to the top 10. Good, quick shooting really helped me get there. Our skis were great today,” she said. “Our wax techs really did a great job. The course held up well and was pretty fast today. I really like the two-kilometre loop here – nothing too challenging for hills and lots of one skate.”

When everything clicks on race day for endurance athletes, they tend not to point to a specific event during the race, but the 700-plus hours of training beforehand each year to get them there.

“I’ve been building off each race and gaining more confidence each week. This summer was really good for me. We worked a lot on technique, which has really paid off for me. We also brought in a shooting coach from Norway, which I think was great to have to get some outside perspective,” Crawford said.

Finland’s Kaisa Makarainen won the race in 30:44.8, followed by Russia’s Ekaterina Glazyrina (31.19.2). Crawford was only seven seconds away from the bronze medal, which was won by Anais Bescond of France (31:31.3).

Even though she’s cracked the top 15 three times this season, the race was a comeback for Crawford. On the hunt for a strong relay result on Saturday (Dec. 13), the Canadians finished 11th, 2:11 off the pace in a very competitive race.

Crawford also finished 34th in Friday’s sprint, complaining she felt slow on the day. She shot 9/10 and finished 1:33 behind the leader, Makarainen.

Megan Heinicke was the next fastest Canadian, finishing 61st. Canmore’s Sarah Beaudry, 19, made her world cup debut in the race, finishing 63rd while shooting 9/10. Beaudry was called up to the world cup after the IBU Cup race was cancelled. Crawford said one of her highlights for the weekend was watching Beaudry race.