cccski.com February 3, 2015, The 2015 World Junior and U23 Championships are underway in Almaty, Kazakhstan with the classic sprint competitions. It was sunny and -8 degrees C. as the junior competitors raced in the morning competitions.

Snow conditions were hard packed with temperatures rising through the day to -2C. The persistent smog/fog that shrouds the city held off until the U23 races.

The course was much different from those we typically see in Canada. It had many technical downhills, corners and one massive beast of a final uphill near the end of the course.

First off were the junior women and it was a successful start for Canada in the qualifying race won by Yulia Beloukova of Russia. The competition was tight as Katherine Stewart-Jones qualified for the final in 19th place, only 13 seconds from the lead. The other 2 Canadian qualifiers were Sophie Carrier-Laforte in 23rd and Maya McIssac-Jones was 29th. Annah Hanthorn missed qualifying in 45th.

Qualifying Results
This is the 2nd year in a row that we have qualified 3 skiers for the junior women’s final.

In the men’s competitions the Canadian team didn’t fare as well. Lauri Vuorinen of Finland set the standard and Julian Smith was the top Canadian in 39th, 2 seconds from the top 30 qualifying position. Alexis Dumas was 53rd, Ricardo Izquierdo-Bernier was 56th and Philippe Boucher was 59th out of 77 skiers.

In the knockout quarter-finals Katherine Stewart-Jones and Maya MacIssac-Jones were drawn together in heat 4. The round was won by Natalia Nepryaeva of Russia with Katherine 4th, 9 seconds off the lead and Maya 5th, 12 seconds back from the Russian.

Sophie Carrier-Laforte was in heat 5 and ended up 5th, 12 seconds of the pace set by Austrian skier Lisa Unterweger.

The Junior Women’s final was won by Victoria Carl of Germany. 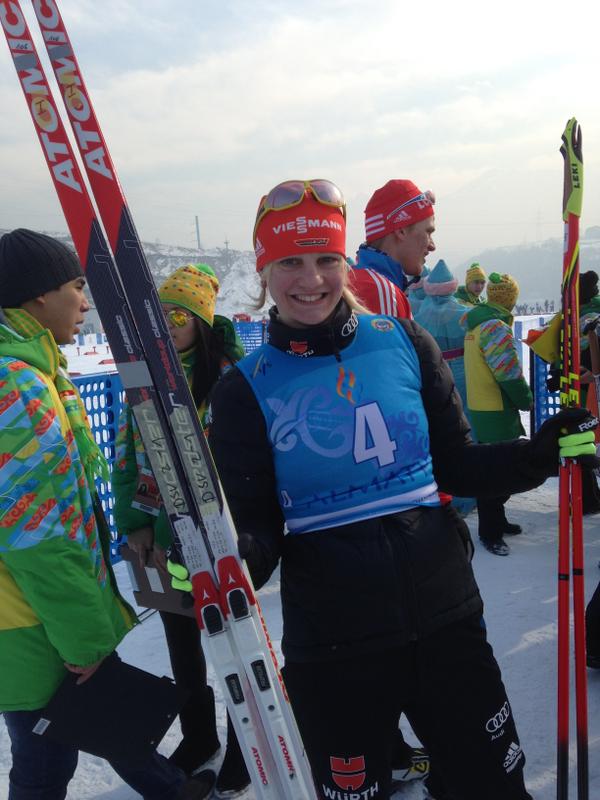 Knockout heat results
In the final results Katherine was 19th, (4 placings back from last year’s 15th), Sophie was 22nd (6 places ahead from 2014) and Maya was 25th (11 places better from 2014). So in general an improvement, now it is a matter of moving further forward in the knockout heats.

Jr. Women’s results
The men’s event was won by Fredrik Riseth of Norway.

Jr. Men’s results
The U23 events were held in the afternoon at Alamaty. Once again the Canadian women had some solid results in qualifying. Olivia Bouffard-Nesbitt led the way with a 12th place finish, just under 4 seconds back of the winner Francesca Baudin of Italy Cendrine Browne was 24th and Dahria Beatty 27th. This was an improvement from 2014 when only Heidi Widmer made the knockout rounds and Cendrine and Olivia were in the 30’s.

U23 Women’s qualifying results
The U23 men had a bit better fortune than the juniors, but less than a second was the difference from qualifying for 2 of the team. Knute Johnsgaard set a fast qualifying time just under 6 seconds behind Sondre Turvoll Fossli of Norway, who was 3rd in the Ruka World Cup sprint last November.

A 10th of a second separated 31st place Seb Townsend from a qualifying result and Raphael Couturier also missed qualifying by about 1/2 a second in 33rd place. Scott Hill was 40th. It was particularly unfortunate that Seb had missed the standard by so little as he is well known as a strong competitor in the knockout heats.

U23 Men’s qualifying results
Knute Johnsgaard finished 3rd in quarter-final 3. He was 2 1/2 seconds off a close finish between the winner Richard Jouve of France and Andrew Young of Britain, a regular on the World Cup circuit. Both lucky losers were from Switzerland and skied in a very fast 5th heat. Knute finished a strong 14th overall.

First and 2nd went to Norway’s Sondre Turvoll Fossli and Sindre Bjoernestad Skar. Skar raced at the 2012 Haywood Canadian Ski Nationals in Quebec City in 2012, finishing 6th in the open sprint as a junior. He also has 11 World Cup starts under his belt with a best result of 8th this year in Rybinsk. Jouve, the winner of Knute’s quarter-final finished 4th in the final and Andrew Young was 12th.

U23 men’s heats
Men’s final results
Cendrine Browne and Dahria Beatty were drawn together in quarter-final number 2. Dahria finished 4th in the heat, 7 seconds from the lead according to the official results. Cendrine must have had a fall or equipment issues, finishing 6th well off the pace.

Olivia Bouffard-Nesbitt finished 5th in her heat about 6 seconds back from the lead.

The race was won by the top qualifier Baudin from Italy. There was another Italian skier in 3rd and 6th.

U23 Women’s heats (note times/placings for quarter-final heat 2 are inaccurate)
U23 Women’s official results
Team Leader, Lisa Patterson:
“Overall a good day. We qualified eight athletes, 3 more athletes than last year, but were unable to advance any past the quarterfinals.

“Our athletes started well and often were in the top of the pack leading into the first downhill. We had very comparable skis for glide but I feel that we lost time on the lane transitions and corners. In general, like many other athletes, we weren’t able to hold the pace on the last uphill.”

Katherine Stewart-Jones
“I’m definitely satisfied with my race. After the qualifier I was a little worried that I had not qualified because I felt like I had struggled with grip up the big (final) hill. I was relieved when I found out I had qualified 19th. I was extremely excited that two of my (junior women) teammates qualified also. In the quarter I had the goal of making it to the semi’s and really believed I could.  Unfortunately, I made a couple of tactical mistakes. Overall a great day for Canada and I am sure there are many more great performances ahead!”

Knute Johnsgaard
“Good race today. My form is good this week which I didn’t feel in the Nor-Am’s leading up to the championships. It was a great day for Canada, I think. We had great skis and had quite a few athletes in the quarters. We were racing in very poor air quality. I’ve never smoked a pack of cigarettes in my life, but I definitely made up for that today by racing in the smog. I’m looking forward to the rest of the championships”

Look for photos to follow later in the day.

Next up tomorrow, interval start, 5 and 10k skate races for the juniors.