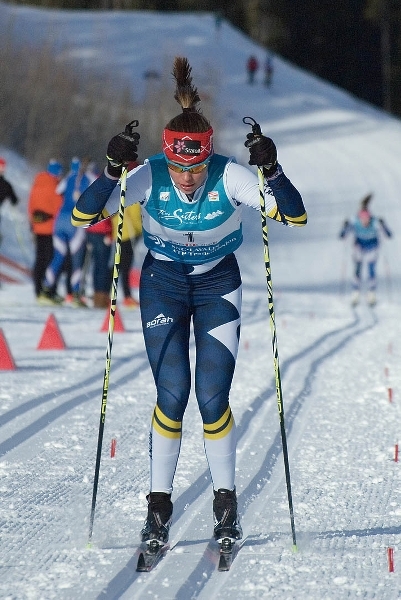 Rocky Mountain Racers phenom MacIsaac-Jones proved to be queen of the sprint, while Winsport junior ski team star Hicks punched his ticket to the games with a strong result in the distance races. The games run from Feb. 13 to March 1 in Prince George, B.C.

MacIsaac-Jones, 19, won the women’s sprint in decisive fashion, pulling away from teammate Ember Large in the A final on Monday (Dec. 8). She was also the top junior woman in Saturday’s classic distance race, finishing behind senior Andrea Dupont to clinch her spot on the team.

“It’s definitely exciting. I went to the games in Halifax when I was a lot younger. I look forward this time to being a bit older and knowing what to expect,” MacIsaac-Jones said. MacIsaac-Jones has trained in Canmore for years, and is now seeing the fruit of her labours.

“I just tried to race the way I’ve been training. (The sprints) were just like another workout. I feel like I’ve been training really hard for this, and I knew what to do,” she said. She’ll race in British Columbia for the rest of the month on the NorAm circuit before preparing for Canada Winter Games.

Hicks was the second fastest junior male in the men’s 10.5 kilometre classic race. Canmore Nordic Ski Club coach Alain Parent said Hicks is young, but on the right path to maximize his potential.

Wasmuth and Mark were dominant in the junior men’s sprints, as 17-year-old Wasmuth came out of nowhere for the win against an experienced field.

“This is the first time I’ve ever come first place in a race. The feeling is unbelievable,” said Wasmuth after his sprint win. “Last year, I wasn’t even competing in my own category. To do this is fantastic.”

Both credited the club’s recent partnership with the Alberta World Cup Academy for improving their results.

“The professionalism of being with the Academy has been amazing. Training with the group we’ve got is really helping us to get our top potential,” Mark said.

“It’s super exciting. Last time, I didn’t know how to ski so it’s super nice to have this opportunity now,” Large said.

Several senior racers also used the weekend as a platform for upcoming NorAm races. In the men’s 10.5 km classic, Erik Carleton and Brian McKeever finished 1-2 on a day to test their fitness. Carleton went with grip wax, while McKeever decided to double pole the entire course in order to work on what he calls a weakness.

“We were on a different strategy ski-wise, and I started 15 seconds behind, so I always had him in my sights, which can be good because you know exactly where you are,” Carleton said. “My first race is in a couple of weeks. It’s good to test out the body leading into the NorAms.”