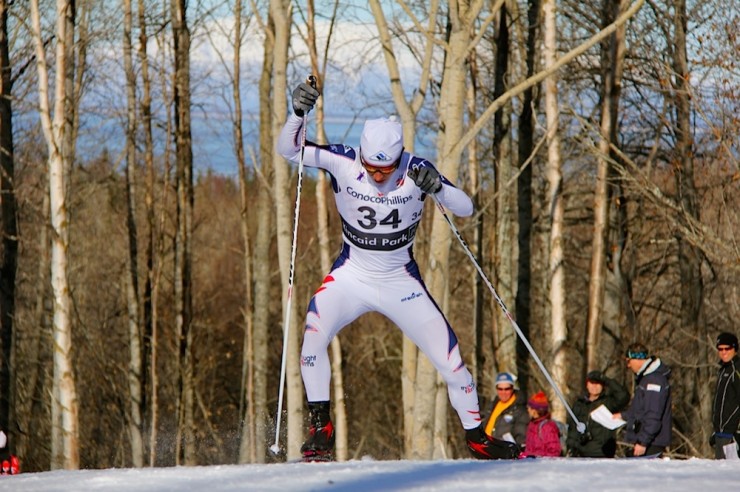 Noah Hoffman placed 38th in Sunday’s 15 k freestyle in Östersund, Sweden. It was his first World Cup finish since March 2014. He is pictured here racing in the 2014 SuperTour Finals at Kincaid Park in Anchorage, Alaska. Photo: Rob Whitney

Noah Hoffman entered Sunday’s 15 k freestyle individual start in Östersund, Sweden with uncertainty, but exited with a clear objective of improvement. The race was the 25-year-old’s first World Cup finish since March of 2014 and marked Hoffman’s first competition after a November crash in Kuusamo, Finland that resulted in a broken fibula.

Hoffman finished his day in 38th, 1:54.2 behind the weekend’s sprint and distance winner, Finn Hågen Krogh of Norway. He was the top North American finisher of the day.

According to Hoffman, the race was a good start to a season that many thought was over for the U.S. skier.

“Obviously 38th is not where I want to end up, even for top results this year after everything that’s happened,” Hoffman said in a phone interview. “It’s a great place to build from and I think I will build going forward, given how the training structure, training load, the altitude, and the injury have played out. I feel like I’m on the upswing and I can build on that.”

Hoffman explained that while he was nervous to be racing again, none of his anxieties revolved around his ankle. The Colorado native said that there was no pain during the competition, and that he didn’t think about his injury while competing in the three lap race.

Hoffman entered Sunday’s race after living at roughly 10,000 feet during his recovery in Colorado. Due to the effects of several months of high altitude training, Hoffman said he needed to focus on having a fast start. While he explained that his actual first kilometers were slower than they felt, he clocked the 33rd fastest time at the 1.8 k mark. From there he slowed, however, ranking in the 50s at 3.5 k.

As Hoffman passed the 5 k mark and lapped through the stadium, Canadian Ivan Babikov began his race and eventually caught the American. The two skied together for the remaining laps of Hoffman’s race.

“[Babikov] was charging on that lap and I got a ride. It was a challenge to stay on him on his first lap,” Hoffman said. “Then he settled a little bit. It was a little easier on the last lap but I didn’t feel quite strong enough to go around him. I got a 10 k ride from him which was nice to show me the pace.”

Read the full article at fasterskier.com