Russia wins again; Canada cracks top 10.
On the men’s side, Russia continued to assert their dominance by winning the 4 x 5 k relay in 45:11.0. They were essentially tied with the French team going into the final leg, but Russian Alexey Chervotkin had too much speed for France’s Louis Schwartz, and Russia won by 17.3 seconds. 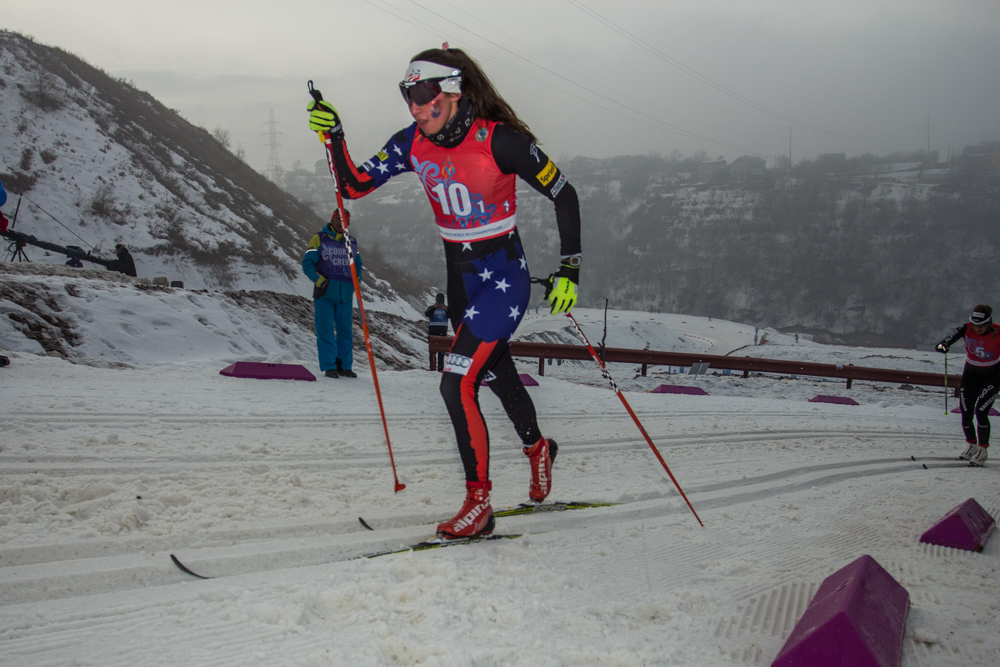 Julia Kern (CSU) races the first leg of the 4 x 3.3 k relay at the Junior World Championships in Almaty, Kazakhstan. The American women’s team would go on to place eighth. Photo: Logan Hanneman.

By Colin Gaiser, fasterskier.com February 8, 2015.
The American junior women’s team wrapped up a successful week at the Junior World Championships in Almaty, Kazakhstan, by placing eighth in Sunday’s 4 x 3.3-kilometer relay. They finished 2:11.0 minutes behind the winning Norwegian team (35:04.0).

Norway erased an 11.1-second deficit after the second leg to claim victory with a time of 35:04.0 and beat the Russian team by 0.4 seconds. Germany used a strong final leg from Victoria Carl to overcome Sweden and take third (+35.3).
Julia Kern (Cambridge Sports Union) set up the American women’s squad by posting the fifth-fastest first leg and putting the team just 8.6 seconds behind Slovenia, the leader at the time.

Kern wrote in an email that the mass start today was not as chaotic as during Friday’s 10 k skiathlon, but was still fast and aggressive. “In these international races, people go hard from the start, leaving it all out there,” she wrote.
The 17 year old added that it was encouraging to be able to ski with the lead pack and be with the top skiers.
“It was relatively fast for the warm conditions, with a few icy spots,” she wrote. “My skis were fantastic, I didn’t slip once and also had really fast skis.”

Northern Michigan University’s Vivian Hett, who skied the second leg, wrote in an email that she felt okay about her race despite falling on an icy corner.

“The ski conditions today were getting a little tricky. The morning started out really foggy but the sun began to shine right after the race began! It has been really warm here so klister was needed for the classic legs,” she added.

17-year-old Katharine Ogden, of the Stratton Mountain School – who placed sixth in Friday’s skiathlon and tied the best American distance result at a Junior Worlds since 2002 – skied alone for the fifth-fastest third leg of the day. However, the team was still 1:16.4 minutes behind Norway and 24.7 seconds out of seventh going into the final leg.

“The people ahead of me were far ahead and the same with the people behind me,” Ogden wrote in an email. 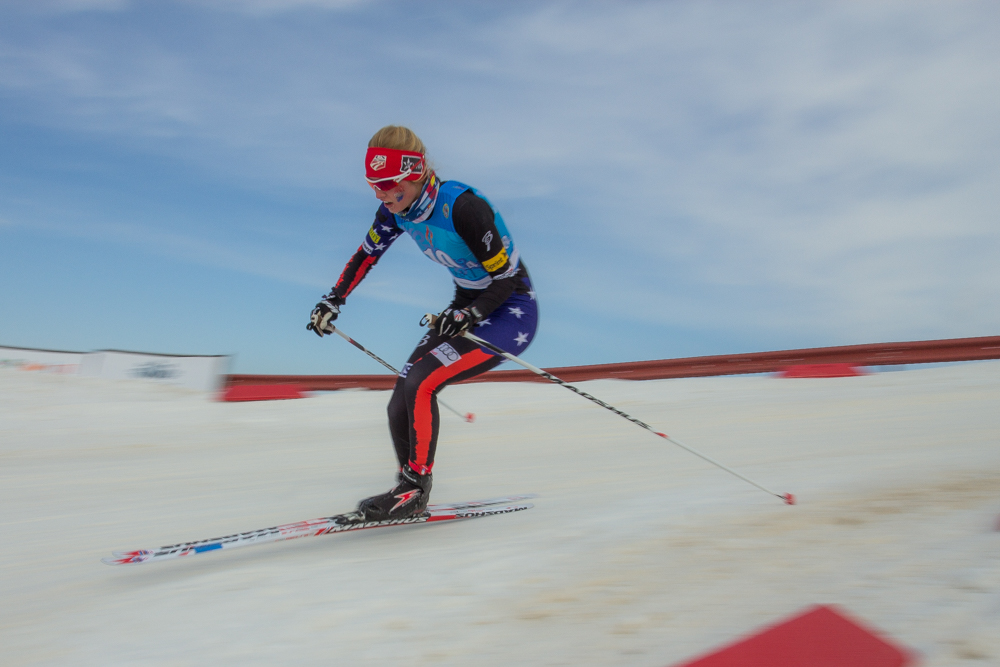 “A pack of teams in front of us had created a gap in the previous leg, so it was my job to hold off the Finnish team behind us. It was a painful but lonely anchor leg for me!” Swirbul wrote.

She explained that conditions on the course were great considering the warmth Almaty has experienced over the past few days, and “the skis were ripping fast as usual thanks to our hard working techs.”

Overall, the American women were satisfied with their result.

“I thought that our team skied really well today. Other than a little crash on the second leg everything went smoothly and everyone gave it their all,” Ogden wrote.

“I was really excited about how our team did today,” Kern wrote. “We had bib 10 and we moved up to eighth, so that was exciting!”

Though Swirbul was happy the team improved on its 10th-place ranking from 2014, she explained that she is confident the team will only get better in years to come.

“It has been great to see the U.S. really mixing it up this year in multiple events, so I am looking forward to improving that relay result in the future,” she wrote.

Meanwhile, the Canadian women’s team finished 10th (+3:04.0). Katherine Stewart-Jones skied first and left the team in ninth, 37.5 seconds back. However, her leg could have gone a lot better.

The 19 year old Nakkertok and Canadian National Junior Team skier – who was 14th in Friday’s skiathlon – wrote in an email that her leg started off well, and she was in fourth after the first lap.

“Then I got tangled up and fell,” Stewart-Jones explained. “I got up as quickly as I could but realized I had lost my ski and that my binding was broken. I ran with one ski until one of the coaches gave me a new one.”

By that point, she had lost a lot of time and had fallen back to ninth place.

“It is obviously a little disappointing but skiing as a team is always a lot of fun anyway. It was great to be able to watch my teammates hammer their legs and cheer them on!” she wrote.

Russia wins again; Canada cracks top 10
On the men’s side, Russia continued to assert their dominance by winning the 4 x 5 k relay in 45:11.0. They were essentially tied with the French team going into the final leg, but Russian Alexey Chervotkin had too much speed for France’s Louis Schwartz, and Russia won by 17.3 seconds.

Norway was never within striking distance of the Russian or French skiers and finished third (+1:01.5).

Read more about the 2015 Junior Worlds at fasterskier.com